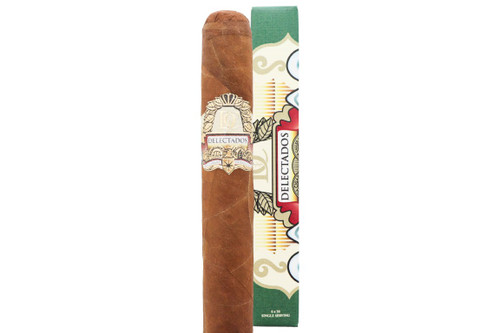 James Bonds fans might remember that “Delectados” was a code word that Pierce Brosnan’s Bond used to awaken a sleeper agent in a Havana cigar factory in Die Another Day. Really observant fans might have caught that the cigar appearing in No Time to Die wears a band that reads ‘Delectados’ as a nod to its predecessor film. This elegant cigar takes inspiration from the in-film Delectados band artwork, so this is your chance to smoke the same cigar as James Bond! What truly makes this cigars special, however, is who made it. This is the very first cigar ever released from the new Diaz Cabrera factory. The man behind this new factory is well-known for having built one of the most prominent cigar companies in the Dominican Republic, and many have been anxiously waiting for the first release from this legendary Dominican blender’s new factory. This cigar will go down in history as being the first, and the experience can only live in our memories because this blend will never be reproduced. Delectados is a 6x54 toro featuring an Ecuadorian Habano wrapper over Dominican Hybrid binder and Dominican Piloto Viso, San Vicente, and Seco fillers.