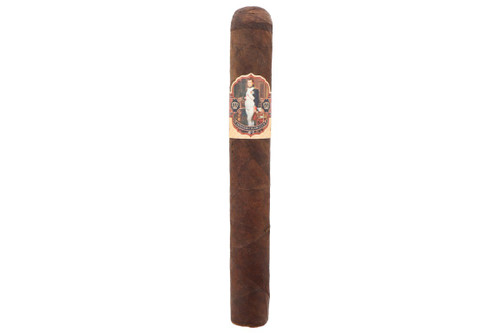 Napoleon was a master strategist and expert in the art of war. France’s domination of continental Europe during the Napoleonic Wars of the early 19th century cemented Napoleon as an iconic figure in history. In 1807, Napoleon invaded and occupied Portugal and Spain, beginning the conflict known as The Peninsula War. In the years that French troops were stationed in Spain, they picked up the habit of cigar smoking and brought it back to France. It was not long before cigar smoking had surged in popularity all across Europe. In this sense, Napoleon and his attempted conquest of the Iberian Peninsula are to thank for the spread of cigar smoking across the world. This blend features a Mexican Stalk-Cut San Andres wrapper, a Nicaraguan Corojo Viso binder, and fillers of Dominican San Vicente Ligero, Nicaraguan Condega Corojo, Nicaraguan Jalapa, and Costa Rican Habano Viso. The 6x52 toro was rolled at Tabacalera Las Villas in Nicaragua. Expect tasting notes of dried fruits, black pepper, cream, chocolate and molasses.